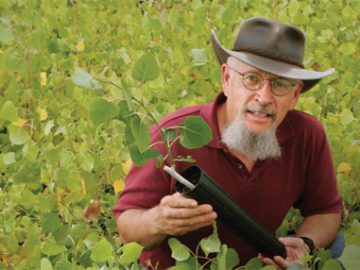 Tom Whitham is a core member of the Center for Adaptable Western Landscapes and a Regents’ Professor, Department of Biological Sciences. A major emphasis of his research is the use of a genes-to-ecosystem approach to restore threatened poplar riparian communities and pinyon woodlands in the western United States. Tom served as the executive director of NAU’s Merriam-Powell Center for Environmental Research from 1999 until 2020. He has authored or co-authored 273 peer-reviewed publications that have appeared top-ranked journals, including Science and Nature. Additionally, he has mentored 32 successful Ph.D candidates and 29 master’s students. Tom has received numerous awards and honors, including the Eminent Ecologist Award presented by the Ecological Society of America. In 2020, he was honored with a Life Time Achievement Award, Department of Biological Sciences, Northern Arizona University.